This article describes how to configure port forwards on a UniFi Security Gateway (USG), and how to troubleshoot them if not working as desired. Port forwards allow you to redirect traffic destined to one or more ports on your USG's WAN IP to an internal host, most commonly to make servers accessible from the Internet.

Steps: How to Create a Port Forwarding Rule

2. The following fields are available for configuration in port forwards. Fill them out according to your needs and click Save. The configuration will then provision to the USG, and the port forward will be active once provisioning has completed. Make sure to test your port forwards from outside your network on the Internet.

Now that you are familiar with each field in the Port Forward tab, let's create some sample Port Forwards. For the first example, we're opening HTTP (TCP port 80) to the Linux server at 172.16.0.7. 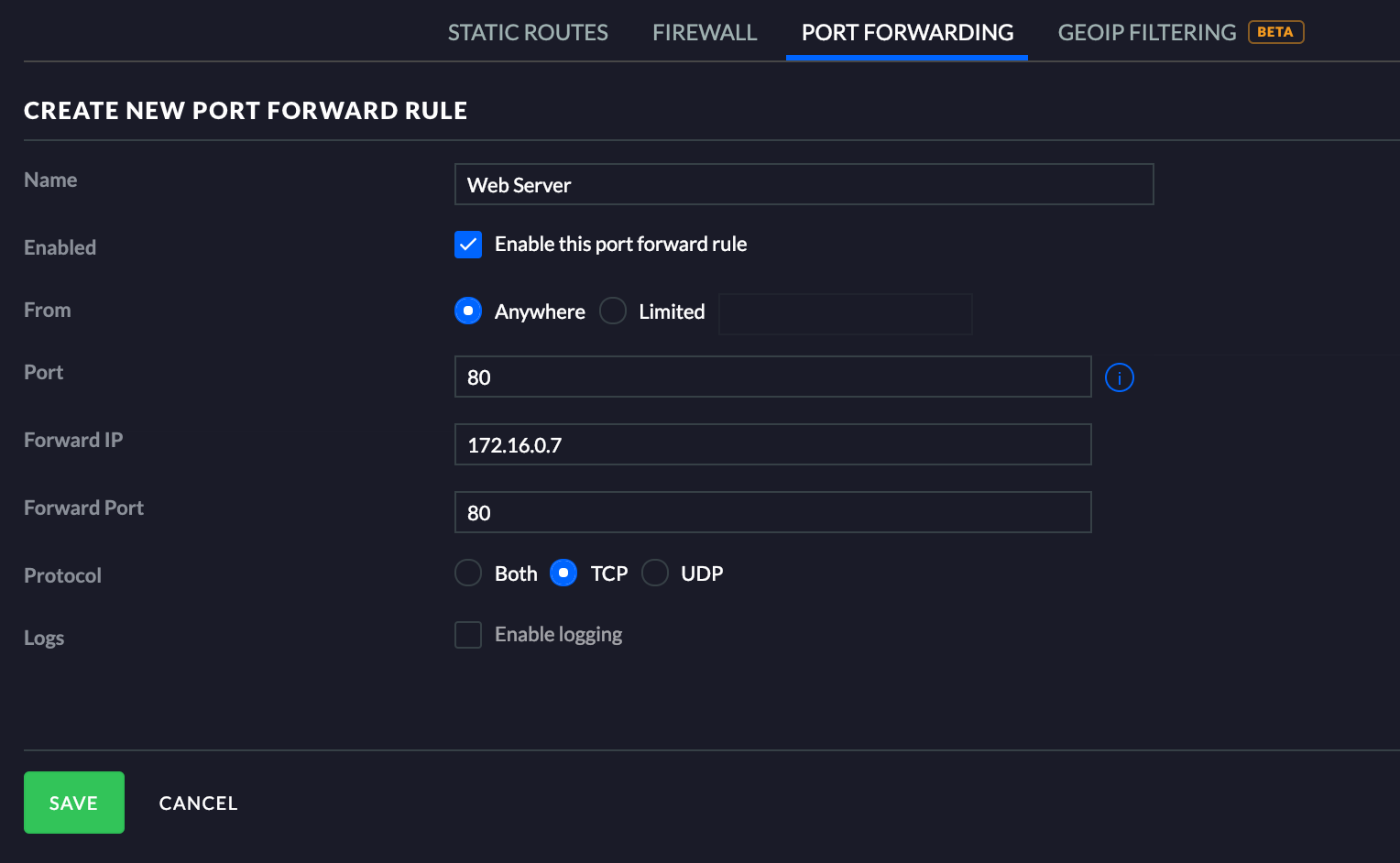 For this example, we'll forward external port 2222 to the Linux server’s SSH on port 22. SSH is a common example of a service that people often configure externally on a different port than internally, mostly to avoid the bulk of brute force attacks. There is no real security in doing so, as any system susceptible to an SSH brute force attack will be found and compromised regardless of port, but there is value in considerably reducing log spam from authentication failures, and not wasting system resources on processing the attempts. It’s preferable to limit source IPs or networks on such forwarded traffic, but if you have a requirement to leave SSH open to the Internet, using an alternate external port doesn’t hurt. 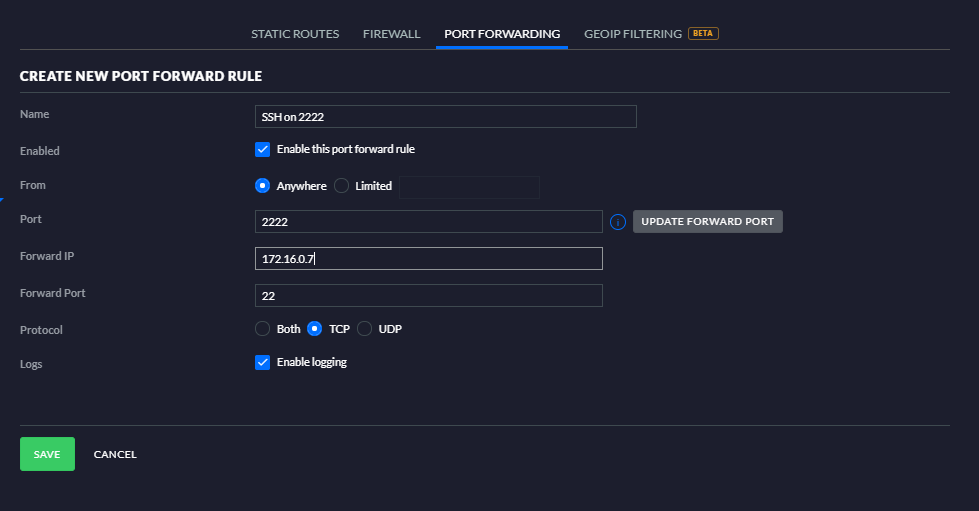 Once again, click on Save. Once provisioning of the USG is complete, the Linux server’s SSH service will be reachable from the Internet on 192.0.2.117 port 2222.

4. Now the Port Forwarding tab will display the two configured entries we just created. You can click the pencil to the right of the entry to edit it, or the trashcan to delete it.

In Settings > Routing & Firewall > Firewall tab the WAN IN firewall rules display the rules added to pass the traffic associated with your port forwards.

If the goal is to SSH to the USG's IP address itself over the WAN, a rule must be created on WAN LOCAL. Settings > Routing & Firewall > Firewall tab > WAN LOCAL. This is not considered a port forward. To create a rule such as this follow the steps below.

2. Select the following:1. Click Create New Rule while on the WAN LOCAL page.

3. Leave all else at defaults, and press Save.

Port forwards are currently only provisioned to WAN1. If you have a multi-wan configuration, port forwards will need to be manually added to WAN2, as well as the firewall rules to allow those port forwards. This will require SSH or console access to the USG. Below is an example of a WAN2 port forward, where the WAN2 address is 100.11.12.13 on eth3, and the forwarded port 22 to internal address 172.16.0.7

1. Create a firewall rule on WAN_IN to allow the port forward.

2. Press Create New Rule while on the WAN IN page

4. Leave all else at defaults, and press Save.

5. SSH to the USG and type the following:

5. The port forward should now work on WAN2 when tested externally.

There are a number of potential reasons for port forwards not working after they’re configured, most of which are outside of the USG itself, but the USG provides powerful tools to help pinpoint the cause of the problem.

This section goes through the troubleshooting process when your port forwards aren’t working as expected.

First, take a close look at your configured port forwards. A subtle typo in an IP or port number has tripped up all of us on occasion. The UniFi Controller won’t allow invalid characters, so no need to look closely for white spaces or anything along those lines. Just verify the IP and port is correctly entered.

When testing your port forwards, make sure to do so from the Internet. A cell phone with WiFi disabled is a good option if nothing else is readily available.

The next sections go through the process of troubleshooting from the WAN and LAN points of reference.

2. Check for traffic on WAN

The first step in troubleshooting port forwards is ensuring the traffic is reaching your WAN interface. If the traffic isn’t reaching the USG’s WAN, it can’t be forwarded. Packet capturing with tcpdump is the preferred method of troubleshooting, as seeing the traffic present or not present on the network definitively determines where the problem exists. The WAN interface on USG is eth0, and eth2 on USG Pro. The examples in this article refer to a USG, so we will use eth0. If you're using a USG Pro, substitute it for eth2.

Without some filtering, the output of tcpdump will be difficult to decipher. A simple filter for destination port often suffices, though if it’s a port shared by other active traffic on the network, that alone is inadequate. The HTTP port forward for instance requires tighter filtering to eliminate unrelated noise. In our use case here, we will filter on destination host 192.0.2.117 (the USG WAN IP) and destination port 80 using the filter dst host 192.0.2.117 and dst port 80.

SSH into the USG to start. Then run the following tcpdump to look for the incoming HTTP requests:

The output that appears above shows a connection attempt to port 80 on USG’s 192.0.2.117 WAN IP, sourced from a remote host on the Internet with IP 198.51.100.114, using source port 51514 (source ports are random from the ephemeral port range). The “Flags [S]” part tells us it’s a SYN packet, the first packet of an attempted TCP handshake. Because we see this request on the WAN, we know it’s reaching the USG. If nothing were to show up in that capture while attempting to reach http://192.0.2.117, then we know something upstream of USG is preventing the traffic from reaching it. See the “Traffic not reaching WAN” section below for troubleshooting guidance.

If you do see traffic coming into WAN, then next is to verify whether it’s leaving LAN.

3. Check for traffic on LAN

Here we will filter on the web server’s internal IP and port 80:

We see the SYN just like in the WAN capture. Its destination IP has been translated to the internal server IP 172.16.0.7. Seeing the presence of that translated SYN leaving the LAN NIC means the port forward is working. The packet shown in response, coming back from the server, points to what the problem is in this case. Flags [R.] means the server sent a RST ACK in response, which is TCP’s way of telling a remote host there is nothing listening on that port. After checking the web server, the nginx service wasn’t configured to start. After starting the web server service, the tcpdump output shows several more packets in the exchange. A successful connection will look something along the lines of the following, with variance on how many lines are shown depending on the amount of data transferred:

If the traffic isn’t showing up on your USG WAN interface, something upstream of the USG is blocking it. Often this is a firewall or other packet filter of sorts built into your modem, or on some other upstream firewall or router. Refer to your modem’s manual to find out more about its configuration in that regard.

The other common circumstance is your ISP blocking the port you’re trying to use. Business class Internet service generally does not have any ports blocked, however, it’s relatively common for residential service to have the ports of common servers (25, 80, 443, etc.) blocked.

5. No reply from LAN host

When you see traffic leaving LAN going to the appropriate destination host like shown in the final tcpdump output shown above, with three SYNs in a row sent to 172.16.0.7 port 80, the host isn’t replying to the traffic for some reason. Often this is a host firewall blocking the traffic on that system. The other common cause is the LAN host missing a default gateway, or having its default gateway configured pointing to a different system. In order to reply back via USG to make the port forwards work, the LAN host’s default gateway must point to USG’s internal IP.

Intro to Networking - How to Establish a Connection Using SSH

We're sorry to hear that!
Please tell us why
Not now, maybe later

Don’t see what you are looking for? Get advice from our Community or Submit a Help Ticket.